Based on the World Risk Index 2012, the Philippines is the third among 173 countries most vulnerable to disaster risk and natural hazards; we experience an average of 20 tropical cyclones each year and other climatic and extreme weather aberrations such as the El Niño phenomenon. These disasters strain government funds, with an average of P15 billion in annual direct damages. More adversely, this hampers the government’s poverty reduction efforts.

To mitigate the effects of climate change and to ensure the effective implementation of disaster risk reduction, the government has put in place interventions to reverse environmental degradation and to improve the resiliency of local communities. At the core of these interventions is the National Climate Change Action Plan and the National Disaster Risk Reduction and Management Plan, which were established to systematically integrate the various disaster risk management and climate change adaptation activities, coordination, and financing mechanisms of the government. 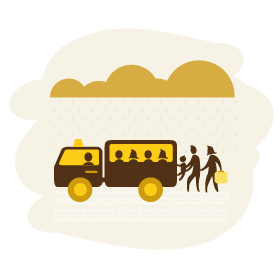 Since its launch in July 2012, the Nationwide Operational Assessment of Hazards (NOAH) project has been in the process of installing over 500 pieces of weather equipment composed of automated weather stations (AWS), automated rain gauges (ARG), and combinations of AWS-ARGs along the 18 major river basins in the country by end of July 2013. The equipment complements units—such as Doppler radars, surveillance cameras, tsunami detectors, and alerting siren—continuously being installed in various locations, to ensure effective location-specific forecasts seven days ahead (as opposed to the three-days-ahead forecast in the past) throughout the Philippines. Moreover, with Project NOAH’s website providing real-time reports, the government has improved at actively tapping into social network platforms to respond swiftly and effectively to its citizens, especially during times of emergency.

The government has likewise crafted the Master Plan for Flood Management in Metro Manila and Surrounding Areas, which will provide a long-term flood management strategy to be implemented up to 2035, covering not only Metro Manila but also the surrounding provinces (i.e., Rizal, Laguna, and parts of Bulacan). Recognizing the urgent need to ease flooding in these areas, the government has approved an initial P5-billion funding for high-impact flood control projects, which will provide immediate effects within 15 to 18 months of their implementation. These projects are now in various stages of implementation.

In addition to the high-impact flood control projects, the Department of Public Works and Highways is implementing 416 projects worth P6.2 billion in Metro Manila, involving the improvement of drainage, esteros, waterways, riverways, and others (e.g., construction of pumping stations) to improve their carrying capacity. The government has likewise allocated funding to the Metro Manila Development Authority to rehabilitate and upgrade 12 priority pumping stations, which will benefit a total of 804,662 people or roughly 161,000 families living in 361 barangays in three cities. 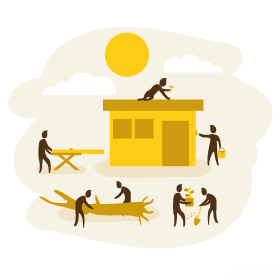 From 2010 to 2012, the Philippines faced 46 typhoons and 1,019 nontyphoon-related disasters that affected more than 5.6 million families and caused around P93.13 billion in damages. In the same period, total government emergency relief assistance—which includes financial assistance, food, and medicine—provided to over 2.64 million families affected by calamities reached P12.54 billion.

The combined amount of assistance from the government and non-government organizations for emergency relief assistance and rehabilitation—which includes financial assistance, food, medicine, housing, and livelihood—reached P15.21 billion, benefiting more than three million family-victims  who were in most need of support. Moreover, to help the victims of natural calamities, the government, through Pag-IBIG, continues to provide slashed interest rates from 10.75 percent to 5.95 percent under its Calamity Loan Program. From 2010 to March 2013, a total of P20.1 billion in loans were extended to 1,056,752 Pag-IBIG members.

The government is likewise making sure that relief and rehabilitation remain sustainable. Those affected by Typhoons Sendong and Pablo continue to be assisted by the government through the repair of vital infrastructure like health facilities, classrooms and schools, roads and bridges; livelihood assistance (especially for those in the agriculture and fisheries sectors); and permanent housing programs. We continue to strengthen and expand our social safety nets, especially for victims of natural disasters, so every Filipino can live safe and productive lives.

No comments to show.